For a long time there was no hall in the Vale of Leven suitable for meetings of any size. The "Oddfellows Hall", an upper room in Random Street near Alexandria Station was used for meetings and marriages. The rooms of Dalmonach School in Bonhill, owned by James Black & Company of the Dalmonach Works, were also made available for meetings and lectures. By the 1860's the needs of the rapidly growing community made provision of a public hall necessary. The fine edifice of Alexandria Public Hall was built in 1862 to house the Mechanics' Institute and its library, and provide a suitable venue for functions, civic receptions and entertainment. 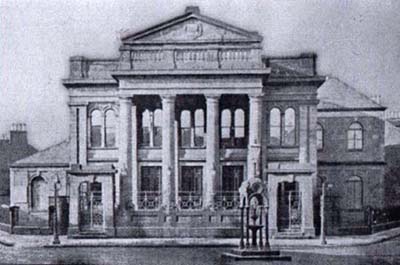 Although it was to be a public hall, similar to our leisure centres, in those days there was no public money to provide it. A limited company was set up to erect the hall. The chosen site overlooking the Bawbee Brig had formerly been a grass park and then McLean's Stables. Capital of £2,500 was raised, and the shareholders were mostly local employers and gentry acting out of public interest.

Mr Hugh McLure of Glasgow drew up the plans for a hall to accommodate 800 people, with smaller function rooms and a keeper's house. Soon after it was built it needed to be extended by side galleries, which increased its capacity to 1,100 people. The total cost of the building was £3,600, but the additional cost was soon recovered by careful management.

The Hall Company was managed by a Committee of Shareholders, including Matthew Gray and James McKinlay of Dalmonach Works, and Matthew Clark and William Greenlees of Alexandria Works. Mr Greenlees was secretary of the Hall Company for many years. He was also President of the Mechanics' Institute, and was later to draw up plans for the new Board School of Bonhill. Mr Greenlees worked for 25 years as cashier with the firm John Orr Ewing & Co. of Alexandria. He was regarded for his services to the community, and was known by many as a "walking encyclopedia". Two dinners were held in the hall in his honour when he retired and left the Vale in 1875. 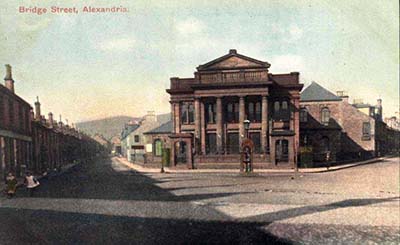 The Mechanics' Institute, a kind of working men's college, was formed in Bonhill in 1834. Weekly lectures and science classes were held during winter evenings in Dalmonach School. It was supported by local employers and run by young men of the district. John Neill in "Records and Reminiscences of Bonhill Parish" tells us that three of these young men were Dugald Bell, author of "Among the Rocks around Glasgow", Henry Airlie, who became British Consul in Brazil, and James Airlie of the Glasgow Abstainers' Union. To begin with, lecturers were not paid at all, and made their own choice of subject. Things worked more satisfactorily after the management began paying lecturers. Some of these were well known in the fields of science and literature. Membership of the Institute was 109 in 1838 and 554 in 1884, but it had as many as 1,000 members at one time.

It had a library of 3,800 volumes. On moving to the Public Hall the inaugural lecture was given by Professor Stuart Blackie, and the President, Peter McMurray, read a verse he had written for the occasion.

History tells us of the existence of another library at this time, the Bonhill Library which was formed in 1823. This was a subscription Library with 40 members. It cost ten shillings and sixpence (52½ pence) to join, but this was later reduced to four shillings (20 pence) to register, and an annual subscription of four shillings. Non-subscribers were charged more than this, in advance. Bonhill Library had a Committee of twelve to manage its affairs. Its first office bearers were Robert Brock, President; James Gardner, Treasurer; and James Wilson, Clerk. In 1825 it had 315 books costing £62.18s.11d (£62.95). 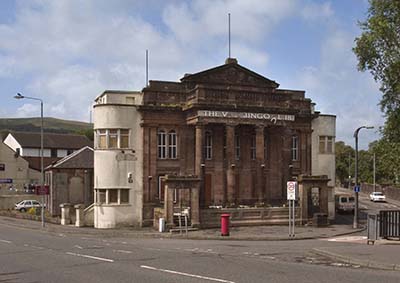 The Public Hall was also a popular place of entertainment in the Vale. Several local bands played there, and a quartet gave recitals at Mechanics' lectures. Cinematograph (moving picture) shows were held between 1899 and 1909. From 1909 the Hall was leased as a picture house called the Bioscope, but was also used for music hall and theatrical entertainment. From the 1920s to the 1960s it was a cinema proper, the Hall Cinema. The rather ugly side wings were added at this time. As happened with many cinemas however, it closed down and became the Vale Social and Bingo Club.

The building is currently being used as a furniture shop.