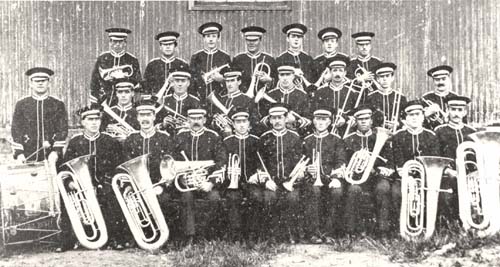 Dumbarton Town band was formed on the 16th October 1902, the prime mover in its formation being Mr. J McCartney, who continued to play a role in its development over several decades.

The first practice was held in McAlistair's Boat-Yard, moving soon afterwards to the Painter's Hall in the Artizan.

Within a few months of being formed and under the leadership of Bandmaster Mr. George Watson, the Dumbarton Town Band played at the 1903, New Year's Day football match between Rangers and Celtic at Ibrox Park, Glasgow.

The band entered its first competition in March 1904 at Bridgeton Drill Hall and carried off premier honours, the test piece being Mikado.

The band had a hall built in Bankhead Road in 1906.

The band performed at local regattas, concerts, gala days, they also toured the north of Scotland.

The 1930's were a difficult time for the band, many older members had retired, the band lacked management and they were looking for a new bandmaster. A new bandmaster was appointed and the band continued performing until the Second World War, when due to more pressing priorities the town band was disbanded.

The band reformed in 1947 and up until the late 1950's continued to play at local events, including the coronation of Queen Elizabeth II in 1953.

The band eventually disbanded completely by the end of the 1950's.