Before the coming of the railways many industrialists invested money in the construction of waggonways, a primitive horse drawn railway on wooden rails, to transport goods between sites, commonly used in the coal fields of North East England. When John Dixon of Sunderland bought Dumbarton Glassworks in 1750 he built a waggonway from Woodside Colliery, Knightswood, to Yoker to allow coal to be transported to Dumbarton by river. The Woodside to Yoker Waggonway was not in use for long, being closed by 1775 with coal later being transported by the Forth and Clyde Canal.

The Coming of Rail 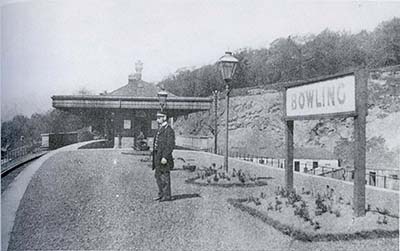 With the growth of railways throughout the UK, West Dunbartonshire began to undergo a rapid growth in rail transport, with many companies building lines throughout the area. The Caledonian and Dunbartonshire Junction Railway, also known as the Dumbarton and Balloch Joint Railway, was opened in 1850, with a track running from Bowling to Balloch Pier. This railway allowed travellers to alight from the Clyde Steamers at Bowling and then travel by rail to Balloch to meet the connecting Loch Lomond Steamers Service, significantly reducing the time it would take to travel the route and opening up the area to the growing tourism industry. By 1855, with the creation of the Glasgow Dumbarton and Helensburgh Railway, the two lines met both at Dalreoch and Bowling, allowing continuous travel by rail between Glasgow and Balloch, thus avoiding river travel completely.

The area was further opened up to rail with the construction of the Forth and Clyde Junction Railway, between Balloch and Stirling in 1856. A largely rural route the line left Balloch towards the industrial areas of Dalmonach and Jamestown before heading into the eastern part of West Dunbartonshire. Caldarvan Station, close to Gartocharn, was the last station in the area and with the line moving onwards to Stirling through many small stations, such as Drymen, Balfron and Kippen. Due to the rural nature of this line and the fact that many stations were far from the villages they were built to serve, Drymen Station was some distance from Drymen being situated in the smaller village of Croftamie, the line was never a profitable venture.

With the growth of industry in the east of West Dunbartonshire, in areas such as Clydebank and Dalmuir, led to the railway becoming a necessity to transport goods and people from one area to another. The Glasgow, Yoker and Clydebank Railway, authorised in 1878, connected with the Glasgow railway network at Whiteinch and carried on to Clydebank and Dalmuir. The line allowed staff from the J. and G. Thomson Shipyard to travel from their homes in Govan, the previous site of the shipyard, to Clydebank via the Stobcross Ferry and the new rail network.

The final large rail investment in the area of the 19th Century was the Lanarkshire and Dunbartonshire Railway, authorised in 1891 and opened in stages between 1894 and 1896, connecting Glasgow, at Possil Junction, to the Caledonian and Dunbartonshire Junction Railway at Dumbarton Central Station. This line crossed West Dunbartonshire through Clydebank, with the picturesque Clydebank Riverside Station, and Bowling, leading to this small village having two railway stations, and allowing travellers to advance to Helensburgh, Loch Lomond and the new West Highland Line.

The 20th century was not kind to the railways of West Dunbartonshire. In 1934, years before the Beeching Cuts, the Balloch to Stirling line was closed to passenger traffic, with the freight gradually being withdrawn from the route in stages up to 1965. With an increase in road transport and the decline in industry in the area the need for such a comprehensive rail infrastructure diminished. Further closures of stations followed, with the loss of Clydebank Riverside, Kilbowie, Dalmuir Riverside, the original Old Kilpatrick Station and one of Bowling's stations, with parts of the various tracks throughout the area being removed or simply left. The decline in Steamer traffic in Loch Lomond led to the closure of Balloch Pier Station, with Balloch Central later being replaced by the present Balloch Station. Today many disused rail routes remain visible on the landscape with some being used as cycle tracks and others remaining as a reminder of railways long gone, such as the Lanarkshire and Dunbartonshire Railway Bridge which crosses Dumbarton Road, Clydebank. Disused rail tracks can also be seen in Dumbarton, Old Kilpatrick and Cable Depot Road, Clydebank, a section of a line which was used to enter John Brown's Shipyard.