On the nights of the 13 and 14 March 1941, the Luftwaffe executed a brutal attack on Clydebank, dealing a devastating blow from which the town never fully recovered.

From the beginning of the Second World War, Clydeside as a whole prepared itself for the expected onslaught and Clydebank, independent and proud, did too. Many felt that the town's industrial profile marked it as prime target, although some believed that the iron in the mountains surrounding Clydeside would interfere with the compasses of aircraft, making reliable target navigation impossible.

At 9 pm on the clear frosty evening of Thursday the 13 March, beneath the light of a full moon, the eerie wail of sirens echoed through the Clyde valley. As the sirens faded, within minutes they were replaced by the drone of heavily-laden bombers.

In the darkness 3,000 metres above, Luftwaffe crews in labouring Heinkels of the elite KGr 100 Bomber Group gazed down on a city in "blackout". However, the silver waters of the Clyde estuary, the river, canal and docks reflected the glare of the full moon. In their aircraft, bomb aimers gazed at neatly-folded night maps coloured deep magenta and green and pinpointed targets far below with ease. The formation spread to mark their targets; bombs and incendiaries rained down and as the citizens of Clydebank scuttled to safety, their town began to burn. 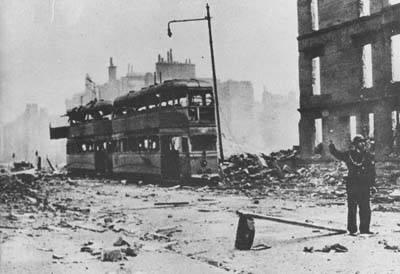 Two burned-out Corporation trams on Dumbarton Road near Pattison Street in Dalmuir, in the aftermath of the Blitz in March 1941

The first bombs were small - 50 kg high explosive, oil bombs and incendiaries, with the intention of starting fires to act as a beacon for the main force, already en route from bases in France, Holland, Denmark and Germany. According to German records, on the first night the Luftwaffe dropped 1,630 containers of 1 kg incendiary bombs. Each container weighed 70-250 kg; a total of 105,300 bombs. Made of magnesium alloy with a filling of "Thermite" and ignited by an impact fuse, they burned fiercely with a heat sufficient to melt steel. Dropped in a variety of containers designed to open as they fell, bombs could be spread in patterns with devastating efficiency.

The first blazes began at Yoker Distillery to the east of the town, and in the 40 acres that comprised Singer's timber yard, which was stocked full. Set on a hill above the town to the northwest, Auchentoshan Distillery was blasted, setting ablaze a warehouse containing the equivalent of 1 million bottles of whisky. From the resulting inferno, whisky poured into the nearby burn creating a line of fire that stretched to the Clyde.

Schools and churches fell easy prey to the hail of incendiaries. Three oil tanks were bombed and one set on fire at Dalnotter, close to Auchentoshan. In every street a fire had taken hold. The "Holy City," so called because its flat-roofed houses resembled Jerusalem from afar, was ablaze from end to end. The town, now an inferno, beckoned the incoming formations and the heavy bombs and parachute mines began to fall.

Such was the intensity of the raid that the emergency services were overwhelmed. Communications were badly interrupted by a direct hit on the control centre; fire-fighting and rescue units toiled independently against hopeless odds. A bomb, leaving a crater 30 feet wide by 20 feet deep, severed the town water main in the early hours of the raid and cut fire-fighting supplies. Immediate assistance from neighbouring services was made impossible by the craters and collapsed buildings which blocked the Burgh's roads.

Hardly a single street in the Burgh was without a fatal casualty. Second Avenue had the highest number of deaths - eighty - when a parachute mine ripped the face off 150 yards of terraced housing. Whole families were wiped out as tenement buildings collapsed, crushing the occupants who had sought shelter in lower floors and closes.

It soon became apparent that the battle to defeat the inferno had been lost, through damage to fire appliances and equipment and to the sheer scale of the bombardment. In rest centres, medical supplies were exhausted quickly. The burned and broken were attended to in horrendous conditions with anything available. For nine hours, wave after wave of bombers mercilessly pounded the town. Into the night, the deaths and destruction mounted. Dawn broke, the all clear sounded, and Clydebank's shocked citizens emerged from their shelters into an unrecognisable smashed and burning town.

The Burgh was evacuated. 48,000 refugees were set adrift and spread afar, many never to return. Clydebank was still burning that evening, when the bombers returned to a near deserted town to complete their task. When the drone of the last bomber had faded, 528 lay dead and over 617 had been seriously injured. Many hundreds more were wounded by shards of exploded glass.

Clydebank suffered a massive loss of housing; 4,000 were completely destroyed, 4,500 were severely damaged and 3,500 suffered serious to mild damage. Only seven houses out of a total stock of 12,000 remained intact. Many large schools and churches perished.

There can be no doubt that the Clydebank Blitz succeeded in causing massive dislocation and hardship to the population. That was part of its design. But Clydebank people were no stranger to hardship, as those acquainted with the town's history will know. Importantly, the psychological effect was the exact opposite of what was intended. Rather than divide the community and throw it into frenzied panic, it strengthened and immeasurably hardened the people's resolve to survive and resist.

There was, however, a lingering anger, tinged with sadness. The once close-knit communities passionately desired to be reunited. This never happened. Ties were severed, many thousands drifted; time passed and people began to make new lives elsewhere. Many still bear the mental and physical scars; all have vivid recollections. The consequences of the Blitzing of Clydebank were as far-reaching in time as they were in effect.