...or the Trees Well, Old Kilpatrick

The village of Old Kilpatrick once had several wells which probably dated back to Roman times and were used to supply the needs of the Roman infantry and cavalry. Excavations at Gavinburn in 1922 showed that the wells were arranged at intervals parallel to the line of the military road. These wells were the only source of water for both industrial and domestic use until the middle of the 19th century. 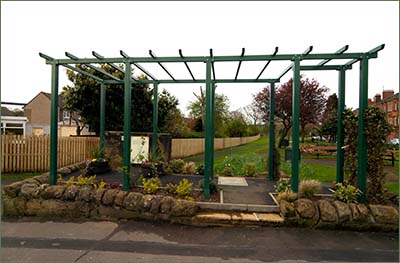 Around 1860, Lord Blantyre, the local landowner, introduced a constant supply of water to some of the properties at a rate of one shilling per pound on the valuation of the houses, but four wells continued in use for several years after this: the Toll or Townhead Well, the Pump, the Ladies Well and the Trees Well or St. Patrick's Well which was situated on Dumbarton Road at the eastern end of Gavinburn Terrace, opposite Kirkton.

The Trees Well was allowed to fall into disrepair and in 1892 Lord Blantyre wrote to the County Council of Dumbarton complaining about its rundown state. The Council was concerned about it being dangerous and the Sanitary Inspector was asked to prepare a report which he duly did. In it he advised that it be closed as it was in a very dirty state and the water was not fit for drinking. At this time the well itself was a sunken hole in the ground surrounded by stones and accessed by steps.

By the turn of the 20th century, the village of Old Kilpatrick had grown considerably and William Arthur Baird, the successor to Lord Blantyre, decided to increase the storage capacity of the water on the hills. A natural reservoir was formed up the Lusset Burn and filters were introduced and constructed at Burnbrae above the village. At the same time a new water main was laid through the village giving an excellent water supply to the inhabitants.

In 1931, it was suggested that the Trees Well or, according to local legend, St. Patrick's Well, should be re-opened and, because of its association with St. Patrick, be turned into a tourist attraction and thus enhance trade in the village. It should be said, however, that there is no evidence to suggest the name St. Patrick's Well was in use prior to the middle of the 19th century. The County Council agreed to this on condition that the public were prevented from drinking the water which was still contaminated. Thus, when it was re-opened in July, 1932 by Lady Baird (wife of Major William Arthur Baird, the landowner), it was surrounded by railings with a locked gate.

In 1951, the well was covered over to accommodate a re-alignment of the road and the following year a new memorial drinking fountain was unveiled a few yards to the east. This was paid for by a grant from the Festival of Britain Committee and a donation from County Councillor Alexander McHaffie.

Minor upgrading work was carried out to the site in 2001 and a millennium capsule containing information about Old Kilpatrick past and present was buried for future generations to discover.