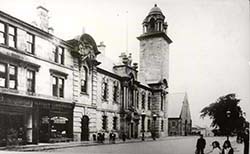 When Clydebank was declared a Burgh in 1886 one of the most pressing problems was where the newly appointed Commissioners could meet and where the administrative duties of the Burgh could be carried out. A double shop on Glasgow Road (later to become the City Bakeries) was procured and the council met here until the new Town Hall was built some 16 years later.

Initially, proposals were submitted for a site now occupied by the Central Library but these were rejected. However, in 1892, there was a competition for the design of new buildings to be situated at the corner of Dumbarton Road and a new road to be named Hall Street. The winner was renowned Glasgow architect, James Miller, whose works included various stations including Botanic Gardens, Wemyss Bay and St. Enoch subway; Caledonian Mansions on Great Western Road, Glasgow; Peebles Hydro; Turnberry Hotel and the great 1901 Glasgow International Exhibition in Kelvingrove Park. 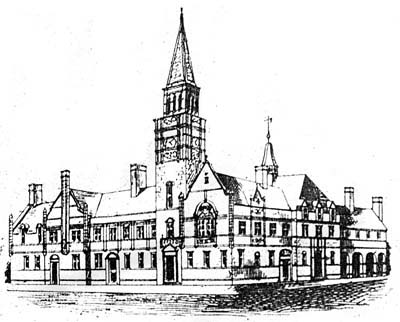 The above design by Miller won the competition but, due to the phenomenal increase in the size of the Burgh, the new buildings were already deemed inadequate before building had commenced.

Laying of the Foundation Stone

Clydebank Town Hall Parade and
Laying of Foundation the Stone

Yet another design was drawn up and on 23rd June, 1900, the foundation stone was laid with full Masonic honours by Col. John Denny, M.P., Provincial Grand Master of Dumbartonshire.

A public holiday was declared and a huge parade marched to the ceremony from Elgin Street via Kilbowie Road, the Singer factory, Duntocher Road and Dumbarton Road.

Four hundred guests were invited to the platform ceremony and banquet which was held in a marquee in the Clydebank School playground on Kilbowie Road. In the evening, a soiree was held in the Public Hall in Douglas Street.

The new Town Hall, comprising halls, municipal offices, council chambers, a library, a court room, and a police station, was officially opened by Provost Alexander Stewart on the 4th April, 1902 when a formal reception was held in the main hall before an invited audience. The evening took the form of a concert interspersed with congratulatory addresses from the Provost and other dignitaries. The following day the buildings were opened to the public for inspection. On the opposite side of Hall Street were public baths which opened on 6th May and a fire station which was not occupied until 1904. The baths are now demolished but the fire station has been converted into flats. 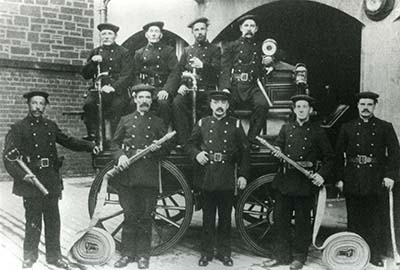 The war memorial in the west wall, the clock, Westminster chimes and carillon of bells were added in 1931.

James Miller was the architect and Walter Gilbert the sculptor, who together were responsible for Troon war memorial and Glasgow cenotaph.

On Remembrance Sunday, 8th November, 2009 a memorial wall bearing the individual names of service personnel who lost their lives in active service in both World Wars was unveiled.

In 1935 the main hall was extensively modernised with additional staging, scenery, special lighting, loudspeaker equipment and other modern appliances. It had seating accommodation for 1000 people and room for 200 couples dancing on the floor. These innovations along with existing facilities made it one of the most modern in Scotland.

Considering the devastation round about it, the Town Hall got off relatively lightly during the Blitz in 1941. Offices were damaged by a bomb landing in the ventilation well but the only casualties were records and documents.

On the morning after the first night's bombing, most of the functions of the Administrative Centre HQ in Kilbowie Road were transferred to the Lesser Town Hall as people naturally gravitated there to seek assistance after the horrors of the previous night. 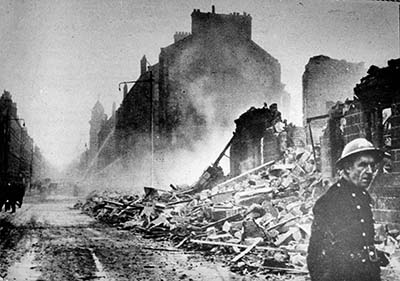 Hosing of Brown's Buildings in Dumbarton Road after the Blitz

Mercury, or the angel as it is known locally, originally stood on the cupola on top of the clock tower. Over the years there have been numerous references to the fact that he was brought from the 1901 Glasgow International Exhibition in Kelvingrove Park but substantial research has pretty well discounted that theory. It is now widely accepted that the sculptor was Albert Hemstock Hodge who in 1901 was commissioned to create the winged figure of light amongst other sculptures for the 1901 Glasgow International Exhibition - his first involvement with architect, James Miller. However, none of these Exhibition figures bear any relation to Mercury and it is thought that Mercury was specifically commissioned for the Town Hall. 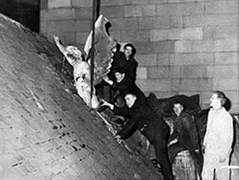 The massive bronze statue ended up in the foyer after a rather unfortunate accident during the notorious hurricane which hit central Scotland in January 1968. The hurricane did what the Blitz was unable to do - toppled Mercury from his perch atop the tower through the roof of the municipal chambers and halfway through the ceiling of the Provost's room!

The delicate operation of removing him from his new site was watched by Provost Malcolm Turner, his wife and several councillors and officials. Sadly, Mercury suffered damage to his wings and leg during his fall but John Brown's yard came to the rescue and did successful welding repairs. The following January, the newly restored statue was placed in the main vestibule of the Town Hall.

During 1994 the second phase of a floodlighting programme was completed which, along with the floodlit public library, greatly enhances the night-time appearance of the buildings. 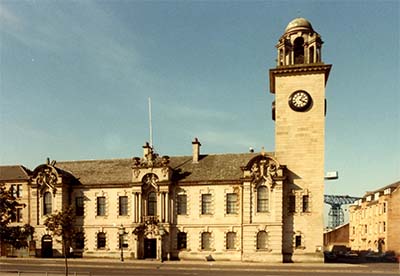 More recently, the Town Hall has been used by the Registrar's Office as its venue for civil marriage ceremonies and, currently, the building is going through a massive refurbishment which will hopefully restore it to its former glory.