The Forth and Clyde Canal was opened in 1790 and closed to traffic in 1954. A spur, the Cart Junction Canal, was opened in 1839. It travelled for a quarter of a mile from the Forth and Clyde at Whitecrook to the River Clyde and was used to carry building materials to J & G Thomson's Clydebank Shipyard. It was superseded by the railways and was closed in 1893. No passenger services were operated on the stretches of canal in Clydebank, but timber was floated across the river from Langbank in Renfrewshire to Bowling, and delivered to the Clydebank's industries by canal.

The Clydebank Shopping Centre was built astride the Forth and Clyde Canal and the depth of the water was reduced for the safety of shoppers and their children. British Waterways' Millennium Project saw the regeneration of the canal and it was re-opened to boats in May 2002. An innovative drop lock, the first in Europe, lowers boats beneath the fixed bridge at Dumbarton Road in Dalmuir. 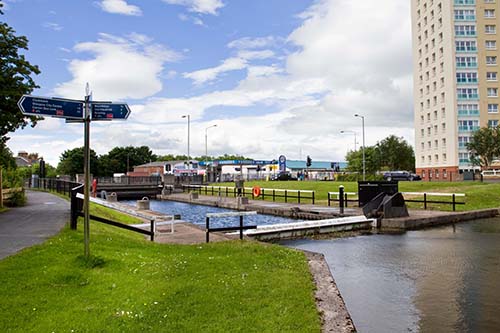 Dalmuir Droplock
Is there anything wrong with this page?