The Land Reform (Scotland) Act 2003 places a duty on Local Authorities to produce a Core Paths Plan. Core Plan provides a basic framework of routes to give the public reasonable access throughout the area.

Core paths are paths or other routes, including waterways, which facilitate access rights under the Act. They will provide a basic framework of paths which will link in to and support the wider path network in West Dunbartonshire. To achieve this, the core path network  consists mostly of existing paths and some new paths.

Core paths can be existing Rights of Way (note that not all Rights of Way will become core paths), minor roads, paths, footways or footpaths, canals or rivers.

For information on core paths in the Loch Lomond & The Trossachs National Park area within West Dunbartonshire contact: 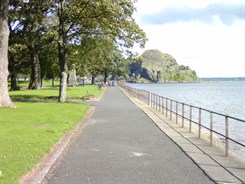 Carrochan
Carrochan Road
Balloch
G83 8EG
Tel: 01389 722600
E-mail: info@lochlomond-trossachs.org
Is there anything wrong with this page?