General Manager in Singer, George Ross McKenzie, a Scot who emigrated to America in 1846, was given the task of locating Singer's first overseas factory. Scotland's, and particularly Glasgow's, established and internationally recognised industries of shipbuilding, cotton thread manufacture and iron smelting, its global trade and shipping connections and, as McKenzie later indicated, its highly skilled but lowly paid work force, were the driving forces behind the decision to locate their first foreign factory in Glasgow.

In 1867 The Singer Manufacturing Company set up a small assembly factory in a rented property in Love Loan near Queen Street Station. This factory assembled sewing machines from parts shipped from Singer factories in America to supply the UK and European markets. As demand grew world-wide Singer relocated to premises in James Street, Bridgeton in 1869 where they could increase production and, more importantly, begin to manufacture rather than just assemble machines. Despite this and further expansion at James Street in the following years the factory could still not meet the world-wide demand for Singer machines and, in 1882, the search began to find a new factory.

In 1881, after initially considering a location in Stirlingshire, the company purchased a 46 acre area of farmland to the west of Glasgow which had excellent transport links via road, rail and river and an abundant skilled labour resource thanks mainly to the existing shipbuilding industry in the area. Singer had chosen to build their flagship factory at Kilbowie.

The building of the Singer's Kilbowie factory, renamed the Clydebank factory in 1900, started on the 8th May 1882 and was completed in 1885. Production began to transfer to the Kilbowie factory from James Street in summer 1884. By summer 1885 Singer's Kilbowie Factory was the largest factory in the world, had the capacity to manufacture 8000 sewing machines a week, employed 3500 people and manufactured sewing machines that were sent around the globe. 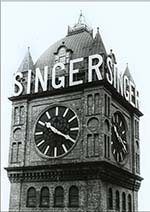 The factory gave Clydebank its most famous landmark; the 200ft clock tower stood over the central wing and has the reputation of being the largest four faced clock in the world. Each face weighed five tons and it took four men fifteen minutes twice a week to keep it wound.

There appeared to be no stop to the ever increasing demand for Singer sewing machines. As demand continued to grow so did the factory. In the early 1900s a two-storey extension was added to the existing main building, a new power station was built to supply the factory with electricity, a cabinet factory, store and sawmill were also added to the site. This expansion necessitated the relocation of Kilbowie train station in 1907. The new station was named Singer Station, one of only a few stations to take its name from a local industry in the UK.

In 1913 production peaked at the factory and space was again becoming an issue. Several more extensions and new buildings were added that year; the last phase of major building works at the site.

The Clydebank Factory was a key player in the sewing machine industry on a global scale. At its production peak in 1913 the factory had grown to occupy a site of over 100 acres, more than double the initial area of land purchased in 1881. Manufactured over 80% of the company's product and, in 1913, shipped 1,301,851 sewing machines from its factory doors around the world with help from its 14,000 employees.

Since its birth in 1851 to its production peak in 1913 the Singer Manufacturing Company had seen a continuous growth over a 62 year period but the tide was beginning to turn. The onset of the Great War, the beginning of a general decline in demand for sewing machines in the 1920's and the Great Depression of the 1930s meant production rates at the Clydebank factory never again reached the highs of 1913.

In the early 1900s the management began to employ Scientific Management techniques at the factory to maximise output. As a direct result of these techniques three women from the Polishing Department were sacked and the remaining twelve women in the department were told to increase their workload for no extra pay. The twelve women struck work on the 21st March 1911 starting the 'Singer Strike'. The following day the majority of the 11,500 workforce had joined the strike. After many discussions between Unions and Management on the 10th April the workforce returned to the factory having conceded defeat.

In 1913 Walter J. Rickey was appointed Manager of the Clydebank factory. A keen sportsman his legacy was the extensive social and recreational clubs set up for Singer employees through a fund he established. In 1921, under Rickey's management, the Singer Recreation Hall and Grounds were formally opened. Sporting clubs, horticultural societies and music groups were some of the many activities provided for employees.

During the Second World War, Singer continued to manufacture domestic and industrial sewing machines but at a greatly reduced rate. The Clydebank factory was awarded their first war contract for the production of tools used in the manufacture of aircraft in September 1938. Throughout the course of the war production at the factory focused of the manufacture of munitions, aircraft parts and equipment for the war effort.

Blitz Damage at the Singer Factory, 1941

On the nights of the March the 13th and 14th 1941, better known as the Clydebank Blitz, the factory was bombed and suffered extensive damage. No loss of life was recorded at the factory however 39 Singer workers died in the town. Singer's contribution to the war effort was so great that work on certain war contracts resumed at the factory on the evening of the 17th March 1941. Less than six weeks after the Blitz full production had resumed despite the loss of 390,000 square feet of the factory.

Alexander Ballantyne with his George Medal

During the war the factory had its own company of the Home Guard, several of whom were involved in the action on the evenings of the Blitz. Among them was Platoon Commander Alexander Ballantyne of the 2nd Dunbartonshire Battalion, whose actions during the nights of the 13th and 14th March 1941 won him the George Medal. Ballantyne was one of only thirteen members of the Home Guard in the UK to receive this award during the Second World War. After the war Ballantyne returned to his work as a gardener at Singer's. On his retirement the Singer Manufacturing Company allowed Ballantyne to remain in his tied house, rent free in gratitude for his part in preventing the total loss of the factory during the Blitz. 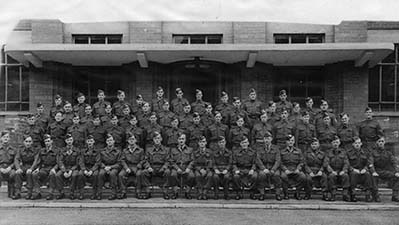 In the post war years the rebuilding of the destroyed areas of the factory and the training of staff in normal production techniques was slow and steady but never again reached the peak of 1913.

With modernisation of the factory, managerial reorganisation and increasing competition in the sewing machine market in the post war period there was a steady fall in orders. This impacted on employment at the Clydebank factory; employee figures drop from over 15,000 in 1960 to just over 6,000 on 1972. Changing fashion also impacted on sewing machine sales which had a direct effect on employment at Clydebank. As the preference moved from treadle or cabinet enclosed machine to portable, light weight machines the Woodwork Division closed in 1966 with the loss of 1,200 jobs.

Demolition of the Singer Main Building, 1981

As a result of increased competition, Singer's slow response to technological change and, with a history of 180 years of sewing machine manufacture, Singer's financial burden from obsolete plant and property it was announced on the 12th October 1979 that "with the deepest regret" the Clydebank factory would close by June 1980.

Click on the image below to find out more about this. 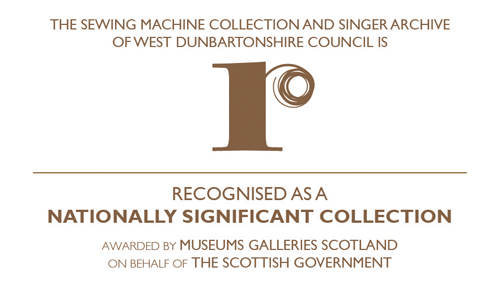 Recognised as a Nationally Significant Collection by Museums Galleries Scotland