The birds of Dalmuir Park Pond

A tall solitary bird (1m). It has a long neck, and long orange legs to allow it to wade in water, and a yellow/orange dagger-like beak. It stands completely still in the water, waiting for a fish to swim close enough to spear it. It also eats small mammals, amphibians, and birds. Their nests are large and twiggy, and usually at the top of tall trees; they nest in colonies, called heronries, and one tree may contain up to six nests.

A beautifully coloured bird, with a large head, and a long sharply pointed beak. The male beaks are completely black, whereas the females have some red on the lower section. Their legs are short and they have stubby tails. They make a rattling sound as they fly past. They have a protective membrane in their eyes which allows them to see clearly underwater. The main diet is fish, but also insects and frogs. They eat almost 60% of their body weight daily! They nest in tunnels, which they dig into the river bank. They are very territorial and will fight to the death. Lifespan is 6-10 years.

The summer adult has a chocolate-brown head (not black, although it does look black from a distance) pale grey body, black tips to the primary wing feathers, and red bill and legs. The hood is lost in winter, leaving just 2 dark spots. A noisy species, especially in colonies, with a familiar "kree-ar" call. Its scientific name means "laughing gull". Diet: worms, insects, fish, carrion, plant material, and scraps. Life expectancy of 32 years.

An omnivorous dabbling duck which inhabits a wide range of habitats, from the Arctic Tundra to subtropical regions. Found in both fresh- and salt-water wetlands. Male birds have a glossy green head, grey wings and belly, while the females have mainly brown speckled plumage. The bill of the male is yellowish orange, and tipped with black, while the female is generally darker ranging from black to mottled orange. Both sexes have distinct iridescent purple/blue speculum feathers edged with white. They're a noisy species; the male has a nasal call, and a high pitched whistle, while the female has a 'quack' call. They are highly gregarious and form large flocks, known as 'sords'. Adults at 14 months, and average life expectancy is 20 years.

The Mute swan (1.5m length) is one of the heaviest flying birds; with males (known as 'cobs') averaging 11-12kg. White, with a long S-shaped neck, and an orange bill with black at the base of it. Males are larger than females and have a larger knob on their bill. They are strongly territorial with just a single pair on smaller lakes. They nest on a large mound, built from waterside vegetation, in shallow water on islands in the middle of the lake. They are monogamous, often reusing the same nest each year. Both sexes share parental care. They feed on a wide range of vegetation, both submerged aquatic plants, and by grazing on land. 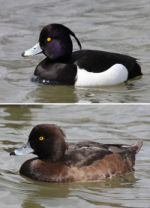 A medium-sized diving duck with a population of close to one million. The male is all black, except for white flanks and a blue-grey bill. It has an obvious tuft that gives the species its name. Females are brown with paler flanks. They breed widely throughout temperate and Northern Eurasia, and are all-year residents in most of the U.K. their breeding habitat is close to marshes/lakes with plenty of vegetation to conceal the nest. Diet: molluscs, aquatic insects, and some plants.