When the Old Kilpatrick School Board was set up in 1873, the only school in the area now known as Clydebank was Mrs Pitblago's "adventure school" (ie; a school set up as a private venture, for profit) in a room-and-kitchen in Clydebank Terrace. When Mrs Pitblado declined to come under the jurisdiction of the Board, it was forced to lease a bothy at the Clydebank Shipyard and set up a temporary school there. 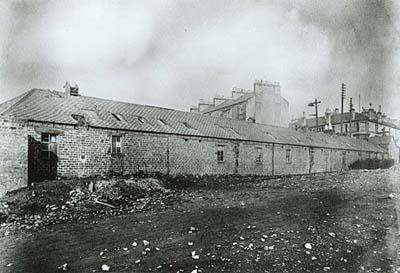 The "Bothy School" at the north-east corner of Clydebank Shipyard

The bothy was quickly fitted out as a classroom, and bricks were prised from the walls to create windows in the building. The school opened on 11 August 1873 with John Fulton appointed as the teacher. It closed in 1876 when it was replaced by a new purpose-built school on Kilbowie Road.