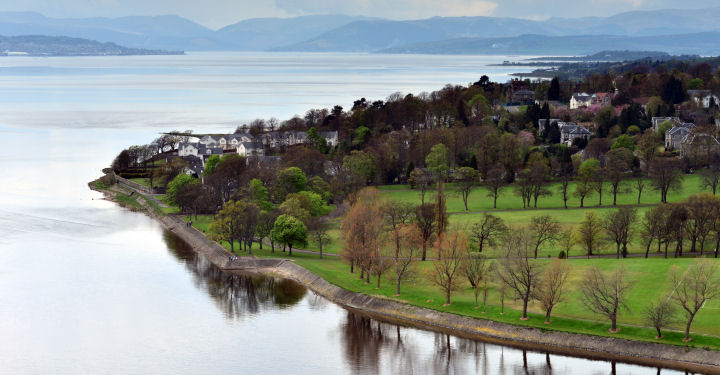 Levengrove Park, in Dumbarton, is located on a dramatic stretch of land where the River Leven meets the estuary of the River Clyde. It occupies a south facing slope overlooking the Leven to the north and east and the Clyde to the south. It affords dramatic views across the Clyde to Renfrewshire and to the adjacent town and Dumbarton Rock on the other side of the Leven.

The park consists of a formal garden with extensive spring and summer bedding displays, there is also mixed shrub planting in the formal area, an Arboretum, open grassland, recreation facilities which include a ball court, and a large play area with facilities for children of all ages.

The park also has a café and Rangers Office in the new pavilion in the middle of the park.

The park hosts a number of events such as the Scottish Pipe Band Championship in July, a gala day in July, and a firework display in November.

West Dunbartonshire Council’s Greenspace section was successful with a bid to the Heritage Lottery Fund’s Parks for People programme to restore the heritage of Levengrove Park. The award was £2.8 million with the Council committing £800,000 towards the project with a further £120,000 of work in kind.  You can find out what improvements have been made on the Levengrove Park Project page.

How to find us