Richard Collins family owned the Wood Chipping Mill, Bleach Works and Paper Making Mill on the banks of Duntocher Burn since 1747. He closed the Chipping Mill and Bleach Works in 1840, and in 1857 the Paper Mill was closed due to fire damage, moving the works to Kelvindale.

In 1858 the site above Dumbarton Road was divided by the construction of  the railway.

Some years later, Dalmuir House, the Mill and the surrounding lands were sold to Wm Dunn 'King of Scottish Cotton' who had cottons mills in Hardgate and Duntocher.

His descendants in turn sold to the Burgh of Clydebank.

The buildings at the park's depot area were part of the former Paper Mill, which stretched beyond the current Dumbarton Road. The park's depot is adjacent to the site of the flower beds which look magnificent and full of colour in spring/summer time. This area, with its trees and flower beds is often used by bridal parties as it is an ideal location for wedding photographs.

Floral Displays which were popular in the Edwardian period were laid out on the flat ground below the pond on which the wood chipping and bleach works formerly stood.

As part of the V.E. celebrations in September 1945, the floral display was illuminated. The district's industries participated and the Singer Company provided the floral clock replica of the giant Singer Clock which was a major feature in Clydebank.  This replica was usually sited on the pond embankment. 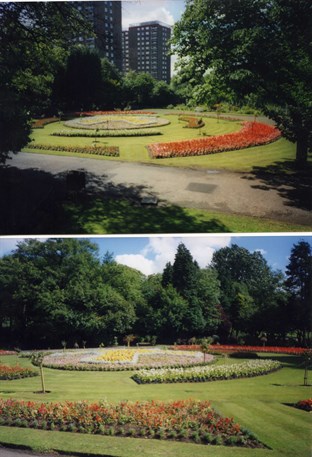 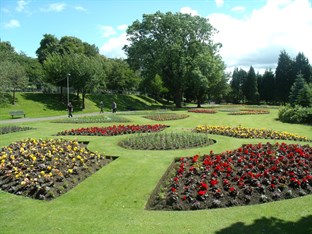 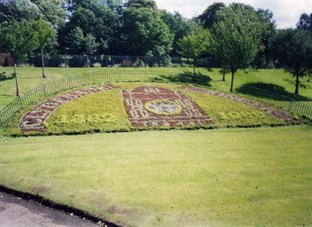